Smaller G measured by an acceleration sensor means that the extent of the shock absorbed is more.
Various test results have proved that the shock was absorbed by the Hit-Air.

Overview of the Test

Data in this catalogue are the results of the test conducted by JARI.
Drop tests employing crash-test biofidelic dummies were carried out to verify the performance and effectiveness of airbag jackets (ABJ) for motorcyclists. Drop impacts were measured with a dummy wearing ABJ (under pressure when it is activated of 40 kPa) and with a dummy of non-ABJ for comparison. 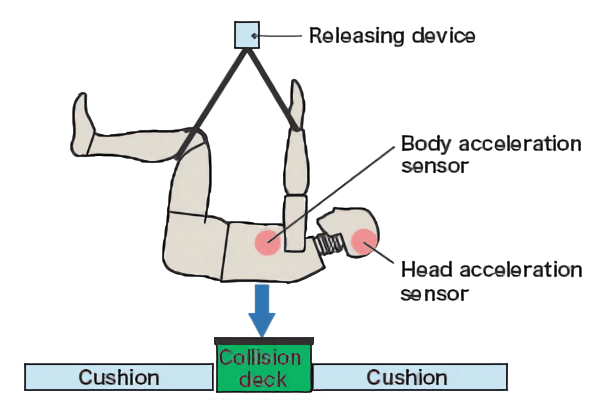 The dummy was suspended from a certain height by a rope tied around its limbs and was dropped onto the collision deck by a releasing device incorporating an electromagnetic mechanism. Head and chest accele rations were measured by acceleration sensors, hest to measure crash impacts for the prediction of human body Injury upon collision. 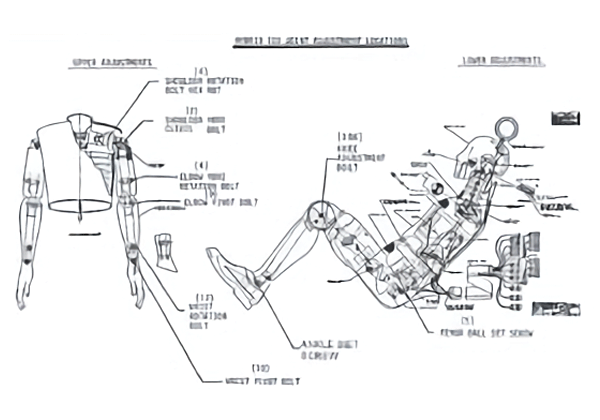 As the testing biofidelic dummy, a Hybrid-III AM50 model representing a U.S. average-sized adult male (175 cm tall and 78.3kg in weight) was employed. It wore underwear and was equipped with sensors built in its head and chest to measure crash impacts for the prediction of human body injury upon collision. 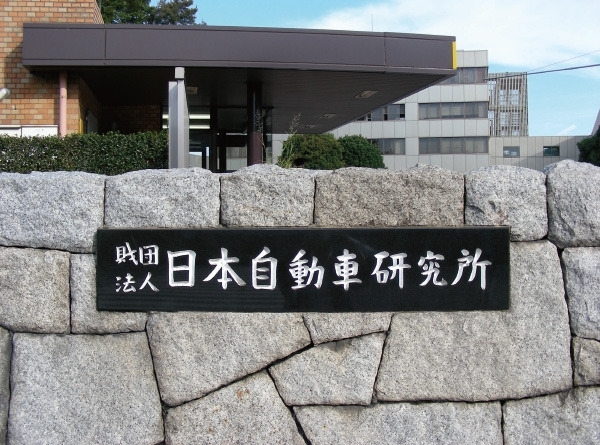 Japan Automobile Research Institute (JARI)
World-famous JARI was established in April 1969 to engage in general research on automobiles. They do test-research, consultation, joint study etc. related to automobiles and have been expanding into a wider field of Industrial activity. They work for the Japanese government Including Ministry of Economy, Trade and Industry, Ministry of Land, Infrastructure, Transport and Tourism etc. (more than 100 cases annually), and for automobile manufacturers, parts manufacturers and their associations, as well as for other industries not necessarily related to automobiles (more than 400 cases annually).

Back side landing test 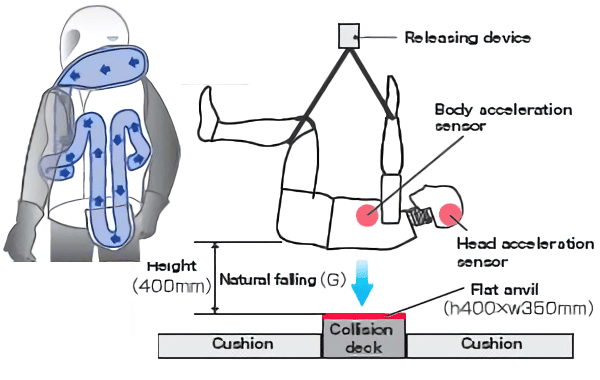 Effectiveness of the jacket type model GS-3 and the vest type model MV-2 were found out to be similar. This means that all of our jackets and vests using the same airbag are equally effectivo. Except for KM, FR and FFE models 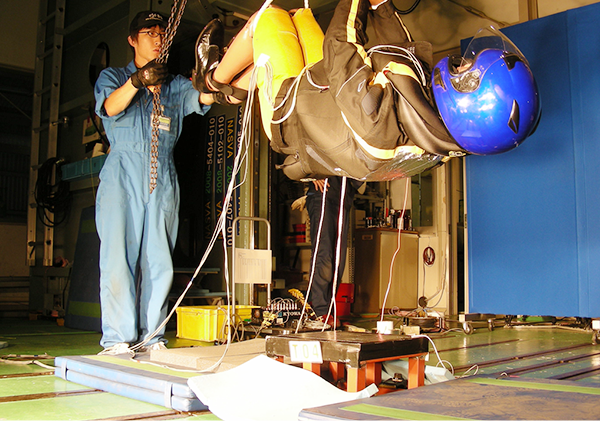 The maximum body acceleration value obtained from the back side landing of the Hi-Air wearing dummy and non-airbag dummy were compared. 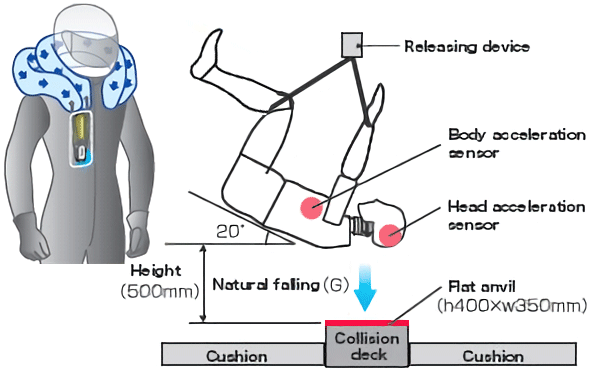 Our neck airbag sold on an OEM basis was tested and found out that a shock on the neck was reduced considerably. 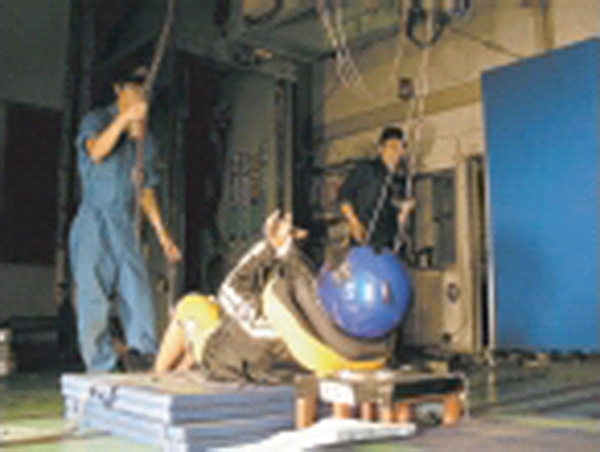 The maximum head acceleration values obtained from the back side landing of a dummy wearing a jacket with a neck airbag attached, and a non-airbag dummy were compared.

lt was found that the neck Hit-Air reduced the head acceleration considerably and that the helmet did not touch the collision deck. 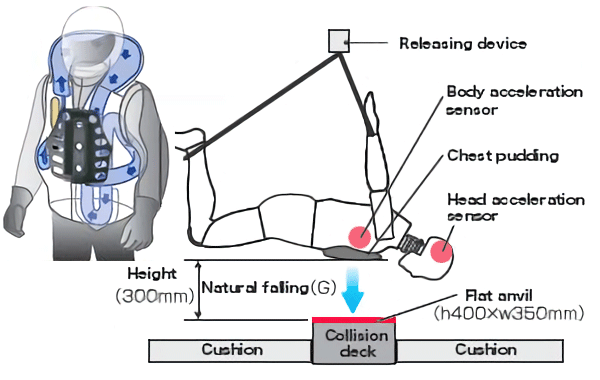 Chest deflection was sharply reduced by airbags assembled in all of our jackets and vests Our "All-in-one chest padding2" was used for the test.(except for KM, FR and FFE models). 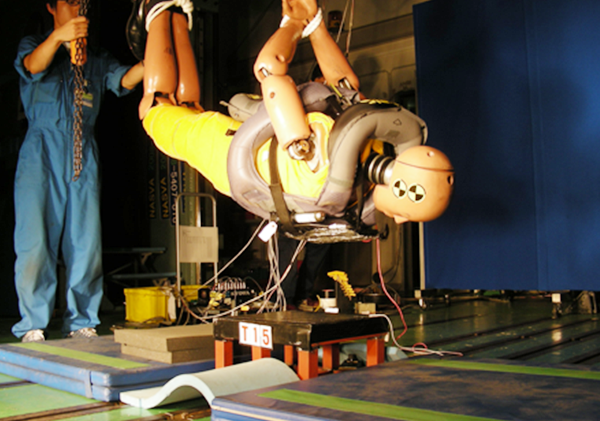 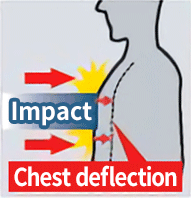 What is Chest deflection?
The extent of a dent of the chest caused by a shock or pressure. Such a dent may injure the internal organs.